As an Amazon Associate I earn from qualifying purchases. All product links on this page are monetized. 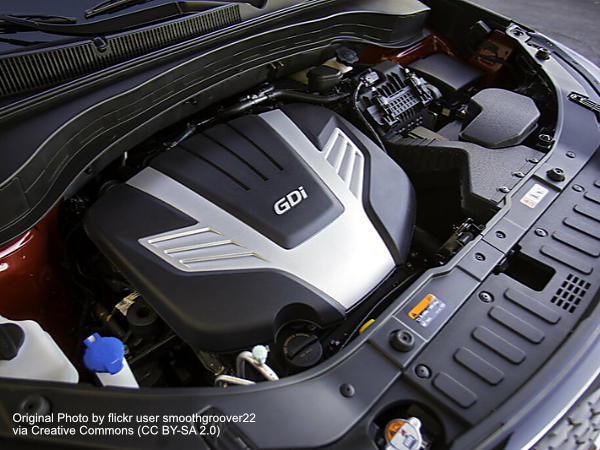 Unfortunately, there's also a downside to the benefits of GDI engines, and that is that the induction systems, especially the intake valves, are more susceptible to deposits that can rob the engine of power, waste fuel, and cause oil burning.

Strictly speaking, this page isn't so much about oil as it is about how to keep the intake system, valves, and rings of GDI and T/GDI engines clean. Choosing the right oil for your GDI engine is part of this. This page discusses other maintenance that can help keep your car's GDI or T/GDI induction system clean.

How are GDI and T/GDI Engines Different? 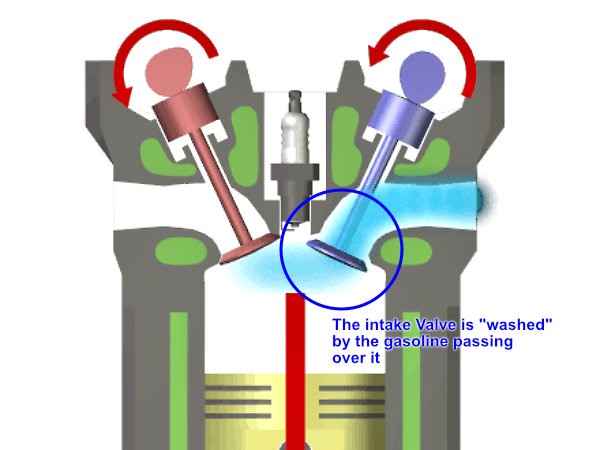 Traditional carbureted engines mixed the gasoline and air in the venturi of the carburetor.

If the engine was naturally aspirated, the mixture of air and gasoline was drawn from the carburetor into the engine's intake manifold by the vacuum created by the pistons' intake strokes. In turbocharged engines, a pump called a turbocharger generated forced air that helped push the mixture into the manifold.

In both carbureted and port-fueled engines, the gasoline in the fuel-air mixture cleaned the intake valves as it passed over them. Gasoline is an excellent solvent. Even if the valves did get carbon-fouled over time, a can of a good fuel system cleaner like Redline, Lucas, Seafoam, or Techron in the gas usually took care of the problem. 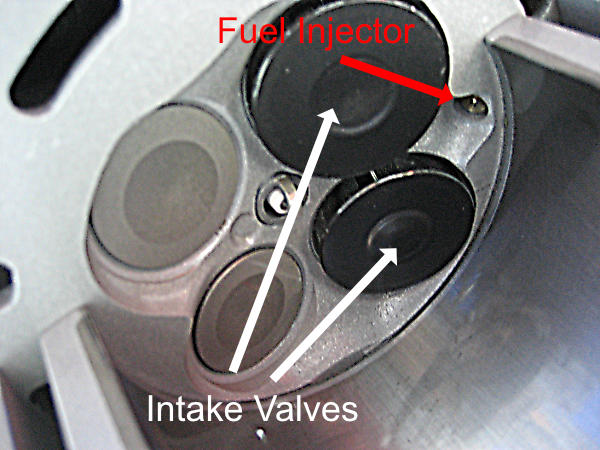 The fuel delivery in a GDI engine works differently. In a GDI engine, the gasoline is injected directly into the cylinder head or cylinder, under very high pressure, downstream of the intake valve. In other words, only air, not fuel, touches the valve faces.

During normal cruise operation, most GDI engines inject the fuel into the cylinder during the compression stroke, during which all the valves are closed. This results in an ultra-lean mixture that maximizes fuel economy.

Under heavier loads, the gasoline is injected during the intake stroke to provide a richer mixture and prevent detonation. But the positioning of the injector and the fact that air is being pulled into the cylinder through the intake valve means that little or no gasoline touches the back of the valves. So again, there will be little or no fuel-wash effect.

The loss of the fuel-wash effect in a GDI engine means that carbon and other contaminants introduced into the intake system by the EGR (Exhaust Gas Recirculation) and PCV (Positive Crankcase Ventilation) systems will not be washed away by the gasoline. It will slowly build up over time, eventually getting to the point that it affects the engine's normal operation.

That being said, GDI and T/GDI (Turbocharged GDI) engines have enough advantages that in the big scheme of things, the benefits outweigh the drawbacks for most drivers. GDI technology enables precise control over fuel delivery to the cylinders, which in turn enables smaller, lighter engines to produce more power, using less fuel, and producing fewer harmful emissions. But you do have to keep the valves clean; and choosing the right motor oil for your vehicle's GDI engine goes a long way toward doing that.

The PCV System and Carbon Fouling

A lot of the carbon that builds up on the valves and the pistons was introduced into the intake system by something known as the PCV system. Understanding what the PCV system does will help you understand why choosing the right motor oil is critical if your vehicle uses a GDI engine.

The PCV (Positive Crankcase Ventilation) system enables excess pressure in the crankcase to be relieved without discharging the gases into the environment. A simple check valve or metered orifice known as a PCV valve regulates the venting of excess crankcase pressure into the engine's intake system.

In carbureted and port fuel injected engines, this was no problem because the oil vapors that the crankcase gases contained were burned off in the cylinders, and the gasoline in the mixture kept the valves clean. In GDI engines, there is no fuel wash effect, so the valve surfaces tend to build up carbon rather quickly. Consequently, at some point, all GDI engines will need to have their intake valves cleaned. In fact, many experts recommend cleaning the intake system before every single oil change.

Cleaning the Intake Valves on a GDI Engine

The easiest and least-expensive way to remove light to moderate carbon deposits from your engine's intake valves and combustion chamber is by using an aerosol intake system cleaner like those made by companies like Seafoam, CRC, Liqui Moly, and others. (This one is the one I use.)

If you start cleaning the intake valves early on in your car's life and keep doing it regularly, then there's a good chance that the carbon will never build up to the point that the valves need to be professionally cleaned, which is a fairly expensive job. I clean the intake valves immediately before every oil change.

Every intake system cleaner has its own instructions; but they all basically involve spraying the cleaner into the throttle body (or a vacuum hose that leads to the throttle body) with the engine running at a certain RPM, shutting down the engine and letting it sit for a while to loosen the carbon deposits, and then driving the car like you just stole it to blow the carbon out. If used according to their instructions on a regular basis, the better-quality intake cleaners actually remove quite a bit of the carbon.

The best intake system cleaners contain a chemical called polyether amine, usually abbreviated PEA or P.E.A. When used as directed, they can be very effective.

I also recommend that you perform an oil change within no more than a hundred miles (about 160 kilometers) after using an intake cleaner. Some of the carbon the cleaner dislodges from the cylinders and rings, as well as some of the solvent itself, is likely to get past the rings and wind up in the oil; and it's a good idea to get rid of them. I usually drive the car for about 25 miles (about 40 kilometers) to give the cleaner a chance to remove as much carbon as it can, and then do the oil change.

If the carbon deposits are already heavy, then chances are that removing those deposits will require the services of a professional mechanic. You can try repeated treatments using an aerosol cleaner, but don't expect miracles. Intake cleaners work great for light deposits and routine maintenance, but they're not canned magic.

I'm also in the habit of adding a bottle of Techron to the gas every time I do an intake valve cleaning and oil change. I add it to the last tank before I do the valves and oil or the first tank after. Just to be clear, Techron (or any fuel additive) will do absolutely nothing to keep the intake valves in a GDI engine clean because it never touches the faces of the valves. But it will help clean the fuel-delivery system and reduce deposits in the combustion chamber and around the piston rings. 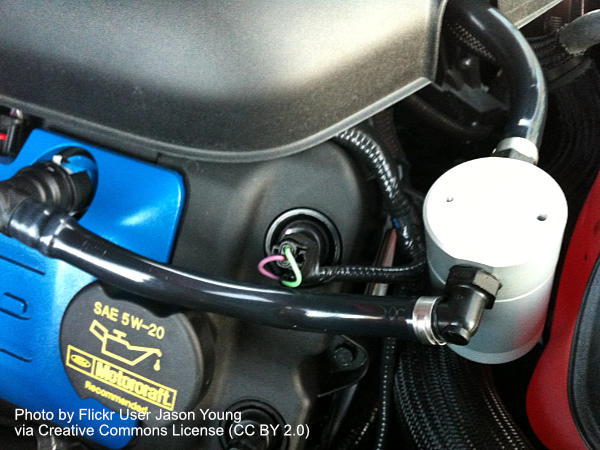 Because a large percentage of the carbon that gets into the intake system comes from the PCV system, many owners of vehicles with GDI engines choose to install oil catch cans in the PCV line.

They also must be securely mounted in such a way that they don't get caught up in the fans, put pressure on wires or hoses, or otherwise get in the way of anything else under the hood.

Finally, oil catch cans must checked and emptied on a regular basis. Depending on the design, an overflowing oil catch can may do more harm than it ever did good. Some may cause the crankcase pressure to rise to harmful levels, and others may feed the captured oil in liquid form into the engine intake. Long story short, if you're going to install an oil catch can, make sure to check it regularly and empty it as needed. The oil should be emptied into a waste oil receptacle for recycling.

There are two classes of oil catch cans. Open-loop catch cans are illegal for use in street vehicles in most jurisdictions because they vent the crankcase vapors to the atmosphere, which is kind of what the PCV system is there to prevent. Closed-loop catch cans feed the gases (minus the oil) into the intake and won't increase emissions, but they might cause your car to fail an inspection for modification to an emissions component. Depending on your jurisdiction, that may also be a crime.

The truth of the matter is that a properly installed and maintained closed-loop oil catch can will actually decrease emissions by reducing the amount of oil burned in the combustion chamber. But it still may be illegal in your jurisdiction; so check first before installing one.

The other possible drawback to installing an oil catch can is that the car's manufacturer may consider it an engine modification that voids your warranty. Unless you let the oil build up to the point that it clogs the PCV system or overflows into the air intake, it's hard to think of a way an oil catch can would damage an engine. But that won't necessarily prevent the manufacturer from asserting that it did. So again, consider the possible drawbacks against the advantages when deciding whether to install an oil catch can.

What are Noack and TEOST All About?

If you've been searching around for information about motor oils for GDI engines, you've probably come across the terms Noack and TEOST. Unfortunately, very few sites define these terms in simple English; so let me give it a shot.

Noack and TEOST are two of the many tests performed on oils to determine whether they meet the requirements for certain categories, standards, and specifications. They're both of particular importance when considering oil for a GDI engine. Choosing oil with low Noack and TEOST values can help reduce the formation of carbon deposits.

The Noack Volatility Test was named after Dr. Kurt Noack, a German chemist and professor who developed the initial version of the test in 1936. It's almost always improperly capitalized as NOACK, suggesting that it's an acronym. But it isn't. It's the inventor's surname. The test is also known as ASTM D-5800. The Noack score factors into most, if not all, GDI engine manufacturers' motor oil recommendations.

The reason Noack is especially important when choosing oil for a GDI engine is that any hydrocarbons lost to evaporation will eventually find their way to the air intake via the PCV system, contributing to carbon buildup on the intake valve mating surfaces.

Unlike the Noack test, the TEOST really is an acronym and should be all-capitalized. It's a proprietary test originally developed by Chrysler Corporation and Savant Laboratories to measure the deposit-forming tendencies of an oil in turbocharged engines. The test has two versions known as ASTM D-6335 and ASTM D-7097.

Although originally developed for turbocharged engines, the TEOST score is a very useful measure of deposit-forming tendencies to consider when selecting an oil for GDI engines, whether turbocharged or not. As with the Noack test, lower is better.

Please note that unlike API service categories and ACEA classifications, values like Noack and TEOST usually do not appear anywhere on the oil's label. They usually can be found on the oil manufacturer's Web sites and sometimes in the marketing materials. If they're not, then you can call or email the oil company to request them. If the company refuses, then I'd start looking at other oils.